SERBADK is listed in the main market on 8 February 2017 and currently has few operational offices not only located in Malaysia but also in Indonesia, United Arab Emirates (UAE), Qatar, Bahrain and United Kingdom (UK). Their global reach can be through their associates’ span in Singapore, Australia, New Zealand, USA, Mexico, Switzerland, Italy and Netherland. 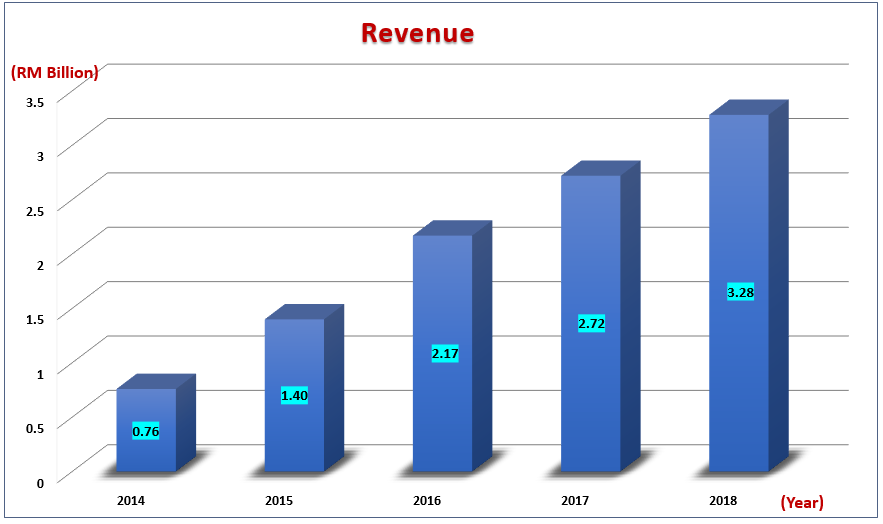 Based on the past 5 financial years of revenue chart above, SERBADK has achieved y-o-y growth from FY2014(+40.95%), FY2015 (+85.63%), FY2016 (+54.56%), FY2017 (+25.55%) and 2018 (+20.6%). On the CAGR basis, the revenue has grown 44.37%. The growth is mainly attributable to increase of successful tender of projects both locally and overseas, an increase in Operation & Maintenance activity in the Middle East as well as the revenue recognition from the Engineering, Procurement, Construction & Commissioning (EPCC) contracts secured through their asset ownership model. 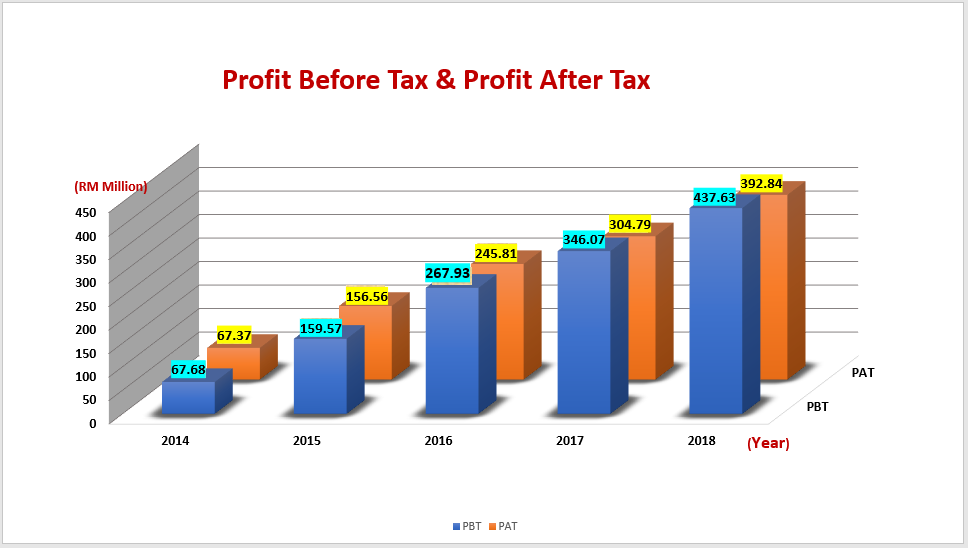 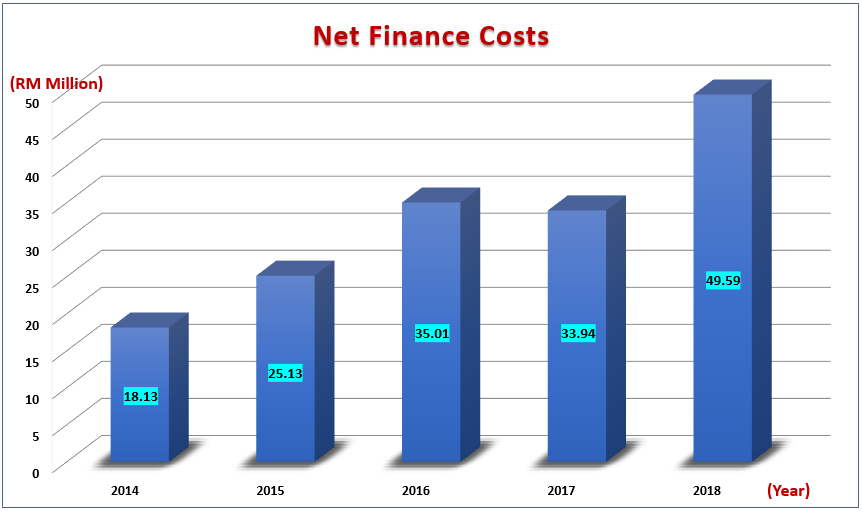 Based on the chart shown above, the finance costs increasing from FY2014 until FY2016 with a slight decrease in FY2017 but increase tremendously higher (+15.65%) in FY2018 compared to the previous year. Based on my computation of liquidity ratio, indicates that SERBADK has a current ratio of 2.568 times in FY2018 compared to 1.633 times in FY2017. An increasing of current ratio in FY2018 from FY2017 indicates that SERBADK do not face any liquidity problems and capable to pay off their obligations when comes due in FY2018 by using the current assets such as inventories, contract assets, trade & other receivables, deposits & prepayments, current tax assets, cash & cash equivalents and other investment.

The net cash from operating activities had a slight decrease in FY2018 amounted to RM83.24 million from RM85.34 million in FY2017. The company is still healthy, with this amount of cash generated.

The net cash from financing activities is increased from RM378.22 million in FY2017 to RM1.24 billion in FY2018, according to the Annual Report FY2018. The increased financing activities is due to the issuance of Sukuk which used to provide working capital as well as to refinance the existing borrowings to drive down the financing cost and cost of capital. SERBADK also has issues RM300 million of Islamic Medium-Term Notes (IMTNs) with a tenure of 5 years priced at 4.95%, RM500 million of IMTNs with tenure of 10 years priced at 5.30% as well as RM10 millions of Islamic Commercial Papers that are short-term tenure.

The cash and cash equivalents of SERBADK has increased from RM265.41 million in FY2017 to RM695.90 million in FY2018 indicates that company have more cash during the year.

Serba Dinamik has achieved an outstanding order book amounted to RM9.4 billion, putting it on track to meet its target of RM10 billion this year. While for the tender books, SERBADK has achieved RM15 billion, with a 30$ to 40% of success rate. (Sources: TheEdge 28Aug2019)

SERBADK has successfully secured an engineering, procurement, construction, and commissioning (EPCC) contract in Uzbekistan worth an estimated of US$250.3 million equivalent to RM1.05 billion. The EPCC jobs such as 90-tonne per day chlorine processing plant in Hazarasp Free Economic area in Khorezm region, as well as 26MW/h steam turbine independent power plant to be completed in 2 years later. Starting from 8 August 2019 until 7 August 2021. (Sources: TheEdge 14Aug2019)

According to Annual Report FY2018, SERBADK also expanding the hydropower projects and investment by adding 20MW EPCC projects in LAOS in addition to their existing 30MW hydropower plant in Kota Marudu, Sabah. The water and utility front with their existing water treatment plants EPCC projects will also expand in Terengganu and their Chlor-Alkali plant in Tanzania. Furthermore, SERBADK also exploring and investing in prospects of industry 4.0 opportunities. For examples, SERBADK partnered with Microsoft to develop Augmented Reality / Virtual Reality solutions for industrial applications as well as acquired 30% of stake in eNoah iSolution India Group to enhance their IT capabilities.

Based on my calculation, Serba Dinamik Holdings Berhad has a fair value of RM14.516. The current market value of SERBADK is RM4.36 which is undervalued. (Based on 4 September 2019) SERBADK have a beta of 0.879 (500days) indicates that the company is less volatile than the market. Based on my computation of Compound Annual Growth Rate (CAGR), SERBADK has an expected market return of 6.18%.

In my opinion, SERBADK has a bright prospect in the future due to its actively engaging and participating in various bidding large projects. Even though the Return on Equity has a slightly decreasing from FY2017 to FY2018, it still able to achieve an ROE with double-digit which is 18.747 times. I believe the company can achieve outstanding performance and secure more contracts in the future.

The research information and financial opinions expressed by ShareInvestor.com website is for information and education purpose only. We do not make any recommendation for the intention of trading purpose or advice. Although best efforts are made to ensure that all information is accurate and up to date, occasionally unintended errors and misprints may occur. You should not rely upon the material and information on this website. We will not be liable for any false, inaccurate, incomplete information and losses suffered from your own action. You need to do your research to make your own investment decision wisely.